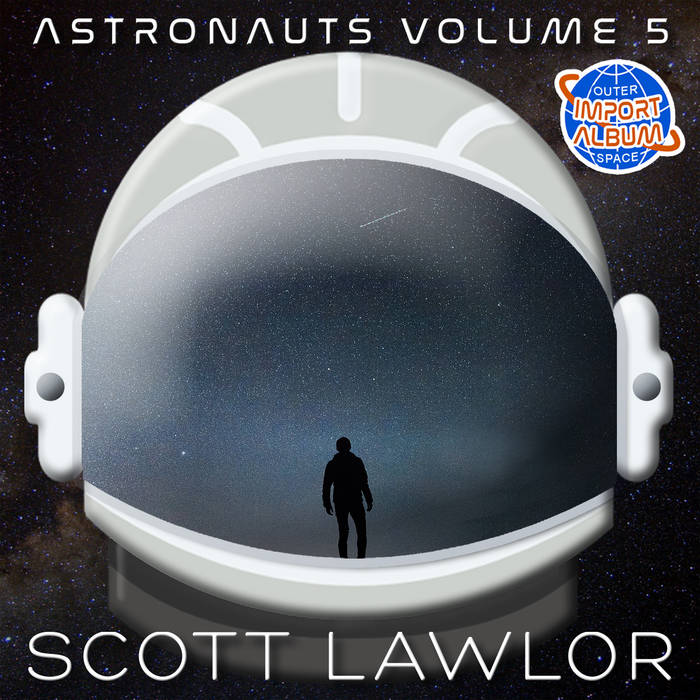 Volume 5 continues with a collection of music from American Electronic Music artist, Scott Lawlor. Read more about what he has to say about Space and Music in the Questions and Answers below:

Q. When did you first become interested in Space exploration?

A. I have always had an interest in space, growing up watching reruns of Star Trek the original series, The outer limits as well as newly aired programs like Project U.F.O and Battle Star Galactica.

Listening to classic albums like Dark Side of the Moon and Saucerful of Secrets were also pivotal moments in the development of my interest in space.

Q. What interests you most about Space exploration?

A. The notion that there is other intelligent life out there in the cosmos. I've always thought that with all of this space, we can't be the only life or exist on the only planet capable of supporting sentient life.

Q. Would you travel to space given the chance?

A. I can't imagine, for me, being blind, it would do much for me except for the initial acceleration.

Q. How are ideas from Space exploration used in your work?

A. Since a lot of my work has a cosmic sound or rather evokes imagery of the vastness of the universe, I find much inspiration from either the planets or specific events related to the phenomenon of outer space.

Q. What are your favorite instruments for making Space music?

A. Mostly my Roland fa08 and some reverb plugins, once in a while samples of the sounds of space as recorded by the PWS plasma wave instrument and more recently, Zanaptic wormhole.

Q. Is there any relationship between Space exploration and electronic music?

A. The vast soundscapes, low frequencies and extended times of space music lend themselves to imagining what it could be like to go to outer space, fly between stars and visit other worlds.

Q. How is Space music different from popular styles of music?

A. Besides the extended play of most space music as noted in the previous question, there is no set form to this sort of music as there is in popular styles where a specific formula is usually followed.

Though I've never seen the stars or planets, I imagine a certain formlessness to it all, still organized loosely but with an element of random chaos.

Space music doesn't have a set form and when listening to it, you're invited on a journey to join your imagination of that of the artist who produced the sound you're hearing.

This space anthology is a collection of tracks from 2013 to the present, including some never-before heard excerpts and unreleased pieces.

Luminous Midnight (Excerpt), is from the 2016 album Haunted Moon, found at scottlawlor.bandcamp.com/album/haunted-moon

Primordial Energy Field, is from the 2016 album Dark Flow Remastered found at scottlawlor.bandcamp.com/album/dark-flow-remastered

From the First Breath of a Star, is from the 2018 album of the same title found at scottlawlor.bandcamp.com/album/from-the-first-breath-of-a-star

Jupiter Is a Cosmic Vacuum Cleaner (Excerpt), is from the 2013 album of the same title found at scottlawlor.bandcamp.com/album/jupiter-is-a-cosmic-vacuum-cleaner

The Geometry of the Moon's Orbit in Motion (Excerpt), is from the 2016 album Haunted Moon, found at scottlawlor.bandcamp.com/album/haunted-moon

Timeless Moon (Excerpt), is from the 2018 album of the same title found at scottlawlor.bandcamp.com/album/timeless-moon

Virtual Particles, is from the 2015 album Journey Through the Boötes void found at scottlawlor.bandcamp.com/album/journey-through-the-bo-tes-void

Within the Path of Totality (Excerpt), is from the 2017 album of the same title found at scottlawlor.bandcamp.com/album/within-the-path-of-totality

Scott Lawlor is an ambient artist from Texas and is also the host of the Blind Flight on the stillstream radio network. He writes ambient in a number of subgenres including dark ambient, space, Drone and conceptual works and has releases on a number of internet labels including weareallghosts, 45echoes-sounds and Treetrunk. He enjoys collaborating with others and is always open to working with new people, trying out new ideas and experiments.
scottlawlor.bandcamp.com