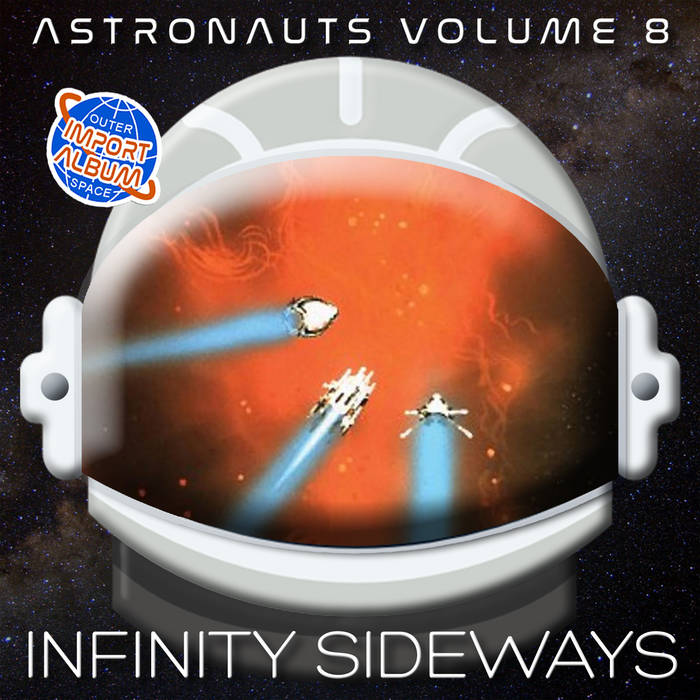 Paul Asbury Seaman Another more-than-worthy entry in this continuing series, the astro-ambient collaborationists of Infinity Sideways (see Notes in left-hand column below) give us a hugely generous portion of quiet, meandering space adventure. Just cohesive enough not to be called “experimental,” and certainly not “dark ambient,” yet abstract enough to let you do your own wandering and wondering. Favorite track: Ouranos.

Volume 8 continues with a collection of music from American Electronic Music project Infinity Sideways (Darrell Burgan, David Herpich, and Mike Metlay). Read more about what they have to say about Space and Music in the Questions and Answers below:

DB: A: As a child. I always have been fascinated by aerospace and astrophysics.

DH: When I was little, my father used to have astronomy posters around. While I’m sure they were monochromatic and small, given the period we’re talking about, I felt their impact as massive and colorful and awe-inspiring.

MM: I can't remember a time when I wasn't. I've collected books on space exploration from the moment I was old enough to read.

DB: Places that people have never been have always fascinated me. I've always believed places resonate. To me, places that are truly wild (like other planets) resonate the strongest of all. I would love to visit some of these places to experience them.

MM: The fact that "Earth is the cradle of humanity, but one cannot live in the cradle forever." Konstantin Tsiolkovsky, the father of modern aerospace science, said that in 1911, and we're only now realizing how right he was. No matter how careful we are, we're eventually going to run out of resources -- and when that happens, we'd better be comfortable with the idea of going elsewhere.

DH: I think many of us are inspired by the notion of finding a domain that human greed and selfishness hasn’t yet mucked up. People everywhere dream of starting over and doing everything better this time. And the vastness of outer space is one of the few things that still seems sublime enough to humble most of us... and that, in itself, is inspiring.

DH: Not before faster-than-light tech comes along. I’m pretty patient on a good day, but...

DB: If I was a younger man, absolutely yes.

DH: To me, images of space are linked with abstract, instrumental music, elements of musical modernism, and a similar sense of exploration in sonic realms. So these interests are all intermixed for me.

MM: I'm inspired by the stark grandeur of space, juxtaposed against frail humanity.

DB: It's direct inspiration -- it seems like a large chunk of my work ends up being space-related in some way.

DB: Thematic interpretation. For example, I've done a Mars album, a Saturn album, and a Luna album. There are also countless minor inspirations, some of which I may not even be aware of.

MM: I love the sounds of space tech: satellites, radio telescopes, data streams... and of course the voices of astronauts. (But not moon missions. Everybody does moon missions.)

DH: Brains, hands, and ears. But if you don’t have the budget for that, you could probably scrape by with just a microphone, a refrigerator, and the Taj Mahal.

MM: Well, for one thing, it's not popular.

Mainly recorded during sessions in 2016, these tracks have been edited and mastered for this album and are previously unreleased.

1. Frozen Sun
2. Rendered Horizon I
3. Steel Crescent Sunset
4. Ouranos
5. The Signals from Capricorn (Elsewhen / Even So)

Each corner is a solo artist, each side is a duet, and the center represents a trio.

The sides are Zen Rat (Darrell and Mike), Flute Of The Fallen Tiger (David and Darrell), and Limbo Folder (Mike and David).

The center is Infinity Sideways.

Infinity Sideways is the 8th incarnation of the ongoing mindSpiral music project, which created two albums under that name before taking on its own unique identity. As everyone knows, an infinity sign is an 8 on its side... and conversely, 8 is infinity sideways.

There has always been something very special about this group. Darrell, David, and Mike may go years without seeing one another, but within five minutes of coming together they're laughing, joking, and making incomprehensible gestures at passersby as if no time at all had passed.

After a dozen years of music and friendship -- traveling around the country and playing everywhere from house concerts to festivals to at least one planetarium -- they think of each other as brothers. This may explain why they draw lines between their performing rigs with gaff tape and yell at each other to stay on their side.

The real magic lies in how their individual musical strengths -- Darrell's sludgy drones and utterly pedestrian keyboard playing, David's disjointed collision of vaguely classical piano and cosmos-in-torment software noises, and Mike's seemingly limitless supply of wrong notes and jarringly inept sound effects -- somehow cancel each other out when they play together.

The result, as you will hear, is effortless music of haunting beauty and slowly drifting contemplation, eminently suitable for writing haiku in zero gravity while looking out the viewport at the slowly turning Earth just out of reach.

Darrell, David, and Mike wish to express their gratitude to Jack Hertz and Aural Films for putting up with their collective irreverence (especially Mike's constant begging to let them have Astronauts 8 because, well, 8!), and to Pyracantha Michael of www.pyracantha.com for the lovely acrylic painting "Three Travelers" that appears on this album's cover.