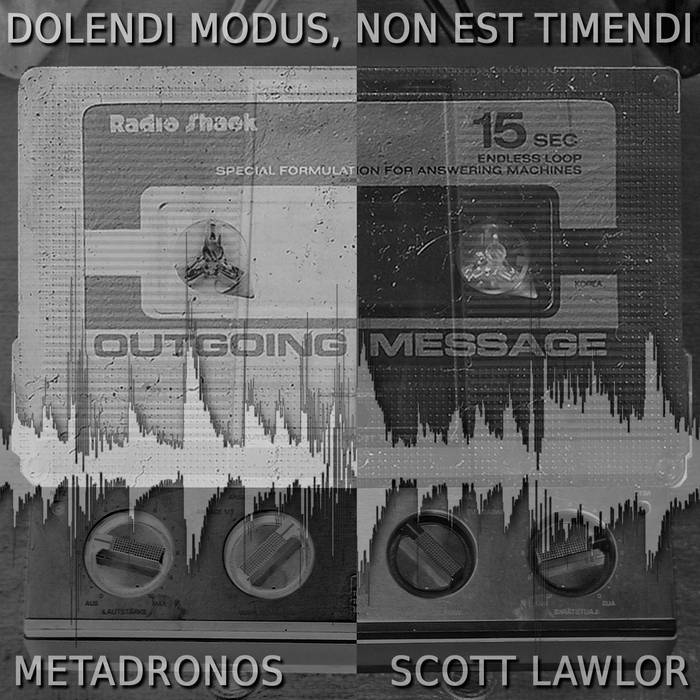 Aural Films brings you a new split release by drone masters MetaDronos and Scott Lawlor. For this one, the artists have left the synthesizers behind to compose an album entirely from voicemail recordings. The result is deep, dark, and disturbing. Proceed at your own risk.

"to suffering there is a limit, to being in fear there is none"
(Pliny the Younger)

We felt that this quotation was an accurate description of the subject matter used to creat this very dark ambient concept album about a friend of mine who has been in all manner of institutions and clinical settings from medical hospitals to insane asylums and the tales of horror therein.

No hardware or software synths of any kind were utilized in creating this album.

All of the tracks were created from various voicemails sent to us, granting both of us permission to manipulate them into the horror that will unfold before your ears.

MetaDronos - born 1981 in Poland.
MD performed his first music experiments in early childhood, using reel-to-reel tape recorder and an old radio. During the next years his experiments advanced, involving more sophisticated homemade hardware, until the first use of PC to process the sound. Abandoning hardware, MD focused exclusively on a computer-based music creation and a hobby became more serious, when he began to build a collection of dedicated software, continuously experimenting with sound and music. His current sound focuses on the deep, dark and long, slowly evolving drones, seasoned with glitch and noise elements. He experiments a lot, so his music evolves all the time.
soundcloud.com/metadronos/

Scott Lawlor is an ambient artist from Texas and is also the host of the Blind Flight on the stillstream radio network. He writes ambient in a number of subgenres including dark ambient, space, Drone and conceptual works and has releases on a number of internet labels including weareallghosts, 45echoes-sounds and Treetrunk. He enjoys collaborating with others and is always open to working with new people, trying out new ideas and experiments.
scottlawlor.bandcamp.com