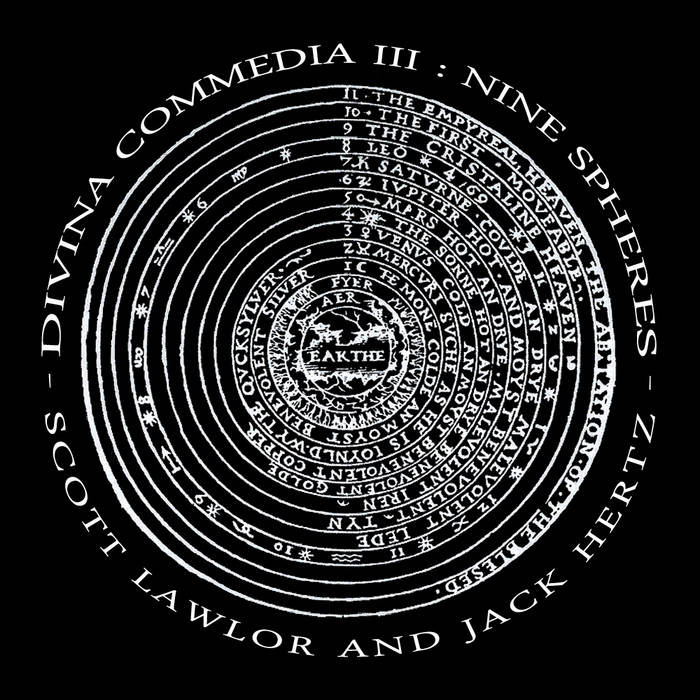 In this, the final installment of the Dante Trilogy, we wanted to bring forth, in the listeners mind, a sense of timelessness and so this concept album is a sprawling 2 and a half hours of music, which, like in the previous two volumes, doesn't take the listener on a literal journey through the Nine Spheres, but acts as a guide to the imagination, setting it free in wonderment about the nature of the divine.

I provided the basic drone material and Jack masterfully crafted fantastic aural imagery, not too dark like in Nine Circles, and not Ethereal like in Seven Terraces, but more towards the Berlin school, creating another unique experience that we hope you'll enjoy.

Thank you for listening.

The third realm of the afterlife details Dante's voyage through the nine spheres of Paradise. Following medieval cosmology, Dante's presentation of the planetary system broadly follows the Ptolemaic geometric model. Beatrice guides Dante successively through the nine spheres, each of which carries a heavenly body which orbits the earth: in succession they include the Moon, Mercury, Venus, Sun, Mars, Jupiter, Saturn and Fixed Stars. The voyage culminates in a vision of God in the Empyrean, the realm of pure light.

Scott Lawlor enjoys composing long form ambient music and broadcasting on the internet. He currently has a program on the stillstream network called, "The Blind Flight." He has released works on a number of netlabels as well as on personal site.

Inspired by the mystery of life. Jack Hertz manipulates sound to create intangible techno-organic impressions between music and noise. Composing and recording music for more than 30 years. Jack is always searching for a sonic middle ground between the real and the artificial. He utilizes machines, instruments, found objects, field recordings, and effects processing to designs sounds, spaces, and atmospheres for deep listening.