by Mac of BIOnighT 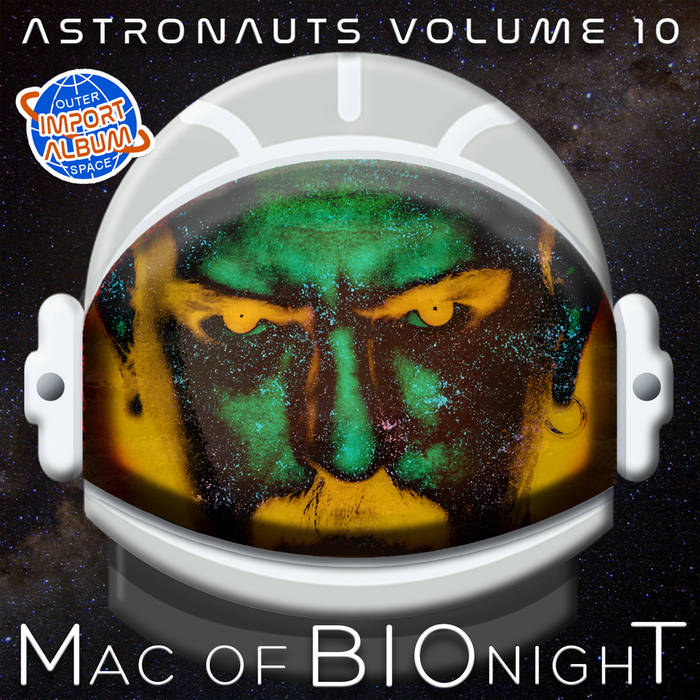 Gideon What a great collection from this artist. I really like the drums on this track, they sound wonderful in my headphones! A must download in my opinion! Favorite track: Bracelets of guilt (2020).

Volume 10 features a fine collection of music from Italian Electronic Music artist, Mac of BIOnighT. Read more about what he has to say about Space and Music in the Questions and Answers below:

A: Space exploration can’t be a direct, hands-on experience, it’s like imagination. It is therefore, to me, just like science fiction. My mother was a huge sci-fi buff, so I grew up surrounded by science fiction novels and watching movies about space exploration, albeit fictional. So my answer is “probably when I was born”.

Q: What interests you most about Space exploration?

A: The possibility to see pictures of planets and galaxies I couldn’t otherwise see.


Q: Would you travel to space given the chance?

A: If I could do it as a space creature capable of living and breathing in space, yes. As a person inside a spaceship, definitely not, I’d be terrified.

A: Through the images we can see thanks to probes and telescopes. My albums are always based on their cover pictures. The images I choose or create guide my music, like maps, unlike all other musicians who record the music first and then decide what to put on the cover. I react to pictures. Watching those images from space, even if I don’t use them directly, is certainly a consistent source of inspiration.

A: I don’t think there’s a direct correlation between what I do and the reasons why scientists explore space… honestly, though, I never thought about it.

A: The same I use for any other kind of music I make: software instruments and imagination :)

A: I think there is. Space exploration, as I said above, is not a direct experience that has to do with things we know and easily recognize. Electronic music is the same, its sounds are not identifiable sounds that are part of our material world, they’re as alien as outer space.

A: Listening to space music takes the ability to reach deep within yourself, it doesn’t do the job for you. Popular styles of music do everything for you and no special quality is required to listen to them, hence their popularity.

My passion for sounds has always been a part of me. When I was a child I spent whole afternoons playing around with a reel-to-reel recorder, and one of my favorite pastimes was what I called “counting the instruments”. Basically, I played a record, focused on one instrument and listened to the end to all it did, then I played the song again and focused on another instrument, and so on until I knew exactly how many instruments were used in the song and what each one did throughout the song.

It was only when I was 16 that I started making what vaguely resembled music, though. For years I used a number of odd objects to record my tracks (broken kitchen tools, broken lawnmower blades, tin cans with inflatable balloons stretched on top, tennis racket strings connected to a turntable needle, an orange toy electric organ, an array of super-cheap flutes, couch cushions, and the list could go on and on). I had been fascinated by electronic music since I was 6 or 7 when I first heard a Pop Corn cover and another couple of tracks made with a Moog synthesizer. However, due to a number of reasons (a disease I used to have that prevented me from working being the main cause (I am fine now)), I never had the money for all those costly instruments. My family never had enough money, nor cared about my passion enough to help me.

My very first taste of electronic instruments – many years later - was in the form of toy keyboards with a grand total of eight presets and no way to modify them.
I guess the big breakthrough (so to speak) happened somewhere around 1987, when I bought a Casio SK1 that, while still being jus a toy, allowed me to sample any sound I wanted (and lose it as soon as I turned it off). A couple of years later I managed to add to it a Casio SK8 and a second hand Yamaha RX21 drum machine. With that depressing setup I recorded hundreds of songs that I still like a lot and that I am slowly re-recording with the gear I have now.

It was probably 1994 or 1995 when I finally managed to get my hands on a real synthesizer, a cheap Roland D5 (five, not fifty). For the first time I was able to actually program my own synth sounds.
The flavor of novelty was lost very soon, though, and I stopped trying to record my music, I just recorded quick sketches when a track popped into my head. I had gone far beyond the limitations of my poor gear and my music was suffocating.

In November 1998, though, a guy gave a ride to one of my nephews, who discovered this guy loved Tangerine Dream, Klaus Schulze and all those musicians that here in this godforsaken little town nobody even knows exist. This would have been amazing enough, but he even composed that kind of music! And, to top it all, we lived five minutes by car from each other! He didn’t have my financial problems, fortunately, so we could use his workstation. In January 1999 BIOnighT started recording their first record. We would go on to record nine albums and one single, all of them released back then by Syngate Records. We were probably the first Italians to release that kind of music in the new wave/internet era of Berlin School, and the first since Baffo Bianchi.

BIOnighT split in 2011. It was a very important experience for me and it was the first time I was actually part of something that would have been different without me, and that’s why I still refer to myself as Mac of BIOnighT to this day.

Being part of this duo didn’t stop me from recording my own music, though, at first with BIOnighT’s workstation and then... and then VST’s appeared, and everything changed. Free VST’s removed the prison I had been in since I started making music. I began using them in 2005. Being able to do everything I wanted, having my skills to improve as my only limit was exhilarating, and it still is. No more toys, no more having something in my head and no way to record it as I heard it in my brain. I will be forever grateful to all those developers that gave me wings.

I have now released almost 170 albums in many different genres and collaborated with several other musicians, and I’m lucky enough to work as sound designer for German company Tone2’s synthesizers.
My “Classic EM” series of records is currently being re-released by Neu Harmony.

I continue to record my music driven by my inner need to do it and to get in touch with that part of myself that can’t be seen. Music keeps me sane and hopefully always will.