Astronauts 7 - Bring Me The Moon 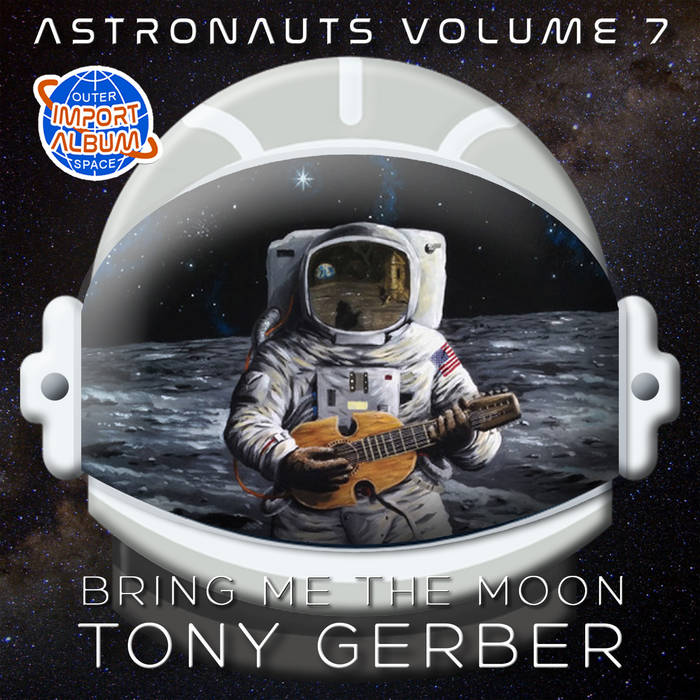 Bill Merrill Outer space and Tony Gerber music, two of my favorite things, come together on this superb release.

Volume 7 continues with a collection of music from American Electronic Music artist, Tony Gerber. Read more about what he has to say about Space and Music in the Questions and Answers below:

A: In the late 60s when I was a youngster, during the Apollo era, and especially sitting and watching the moon landing on the television at 8 years old.

Q: What interests your most about Space exploration?

A: I have always loved laying and staring into the sky at night ever since I was little. Mom said I would run outside and lay on my back in the grass in the summer time gazing into the cosmos when I was little. A farm community in Indiana, so you could see the Milky Way and more… I guess the intrigue started very early. Interstellar travel is very interesting to me...

A: I would have at one point, perhaps now too, but age does tame desire for some things...

A: Sometimes I use the imagery as inspiration… sometimes I play outside at night under the stars for direct inspiration. My group SPACECRAFT has done several planetarium tours playing under the fabricated universe… The vastness of space and vastness of some of the space music sounds have a correlation for me as well… We were also the only music group to present at a national planetarium conference a few years ago.

A: I have always liked to use NASA imagery for many of the CD covers and video projections over the years. As well, scientific advancements related to space exploration helped to pave the way for the synthesizer and other amazing electronic technologies… I also got connected up with some NASA folks in the virtual world of Second Life a few years ago. It has enabled to me to do a few projects in tandem with them.

A: Synthesizer (partial of analog sounds like Moog and Oberheim), electric guitar with Ebow and native flutes, including the Electronic Wind Instrument from Akai...

A: I think I explained that connection in the question above. I will say Jean Michel Jarre’s music has a solid spot when thinking about space exploration hence some of his live link ups during concerts with cosmonauts and his regular soundtracks in planetariums around the country.

A: I think space music is more of an “internal” music, meaning it has a therapeutic effect on the listener that goes deeper than a hook line and chorus, or even words at all… It has always been a therapy for me personally to do the music and it has that same affect on people listening I have discovered over the years. The music is much more contemplative than other music genres I think… I enjoy and play many genres, but space music has been my natural direction since the early 80s. I was doing sound on sound recording with a PAIA synthesizer I built myself in 1975 which paved the way to my love of electronic space music.

The original music selections for this release were the creation of multi-instrumentalist, Tony Gerber. It is full of intuition, spirit and heart, recorded live to digital format.

A big thanks to all my fans around the globe for continual support and enthusiasm for my music. After 50 years of playing music, there is still so much to explore. I am thankful that I am still able to share my passion with those who enjoy listening.