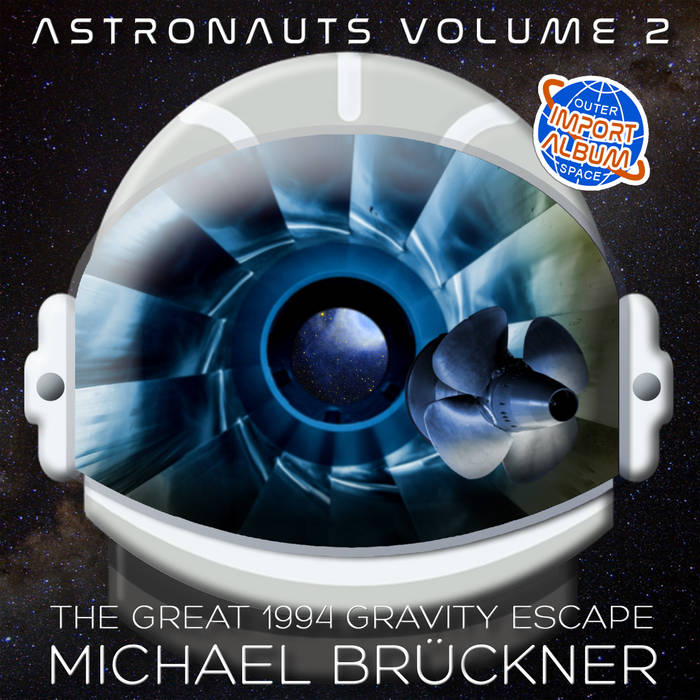 Gideon This is my first album by this artist and I have to say I am really enjoying it! Favorite track: Wastelands.

Volume 2 continues with a collection of music from another fine German Electronic Music artist, Michael Brückner. Read more about what he has to say about Space and Music in the Questions and Answers below:

A: It's hard to determine the exact point in time. When I was a boy of eight or nine years, I started to take interest both in science fiction as well as in planes and rockets. I followed Star Trek, Space: 1999, Star Wars, Perry Rhodan, comics, movies, and TV as much as I could. But also knew "everything" about real space travel, Space Shuttle, the Apollo project - then again I was born in 1969.

Q: What interests you most about Space exploration?

A: It's still mostly uncharted territory, so everything still seems possible "out there".

A: I'm not sure if the actual exploration does effect me much. It's more like the thought of exploration is a source of inspiration.

I really love science fiction (SF) more than hard science. Then again, of course SF is inspired by science itself, so in my case we can perhaps say it's an "oblique inspiration".

A: I think more often space itself is what I imagine or "feel" when working on music, not necessarily the act of travelling there.

Actually, it's a bit complicated to explain, because imagining space always has a spiritual component for me, and I think of outer, physical space and inner space and parallel universes and cosmic realms beyond our imagination all at the same time, and that encompasses also our life on Earth (because where is Earth, after all: in space!).

That big thing put aside though, I actually used space travel as a topic, or theme, for pieces or albums in the sense of musical adaptions of real or imaginary stories (some real stories written by myself, as I dabbled in writing as a younger person, too).

A: Basically the same as for any other kind of music I try to do: synthesizers, samplers, keyboards. But that's not necessarily so - these just happen to be the instruments I'm able to use. An orchestra and a choir in a cathedral might work just as well - and so on.

A: Maybe some of the technology developed for going into space later was used for electronic instruments (surely for computers, I guess) but I'm not sure about the details.

But most of all, it was a relationship created by the media: both seemed to be about "the future" and were combined in sci-fi movies early on, and didn't those big vintage synthesizer systems look just like spacecraft cockpits? So, it's become a cultural association, I think.

A: It's most of the time not about sex, parties, or how much we love or hate some other person. It's rarely about the day-to-day concerns of humans going through their lives. It's also not about politics. It's not about reality as we usually experience it. It's about trying to leave that human perspective for a while and to evoke a wider, higher or deeper perspective, maybe a sense of vastness and awe. It's about distances which are bigger and periods of time which are longer than any human can hope to experience them - Hopefully, with the help of our imagination, we can get a glimps of that.

All music is by Michael Brückner, and all are solo recordings - with one exception: the guest musician on 100 Million Miles Under The Stars is Hannah Brückner on flute.

PLEASE NOTE: The release is divided into three continuous mixes covering different periods of time, each running one hour. However, also the complete three hour playlist is designed to work as one long flow when listened to in one go...

Hour one and two contain music already included in older albums, with one exception: "Delta Space" has formerly been available as a track on Soundcloud only...

Hour three contains all previously unreleased music - actually all improvisations - from 2019, again with one exception: Part 10 was published (in a longer version though) on YouTube.

Detailed track list with further information an insights by the artist:

PLEASE NOTE: The dates given above - for the "first hour" - are recording dates (as opposed to album release dates).
Actually, the "real" release date for my first 85 albums - recorded between early 1993 and late 2006 - probably is 2007, when I finished my huge promotional CD box "No Single Single", which contained all my finished albums (and one CD-r containing a musical "computer game") up to that point. Before, my music was more or less private and enjoyed maximum obscurity - with a handful of slight exceptions (too marginal though to discuss them here in detail...).

All these albums were (and still are) self-released, and can be found here, both as download or high-quality CD-r:
michaelbrueckner.bandcamp.com/music

PLEASE NOTE: The dates given above - for the "second hour" - are album release dates (as opposed to the "first hour", where we have recording dates).

"Hour Two" takes a closer look at the period when I received a slightly higher degree of attention following my first full release using Bandcamp, "Endless Mind Portal" in 2011, and peaking with my first ever "real" label release on SynGate Records, "100 Million Miles Under The Stars" in 2012. Since then, I keep releasing albums on SynGate on an annual basis (like "Trees of Olivanda" in 2017), and releases on other independent labels followed.

Hannah Brückner (my daughter) plays flute on the track "100 Million Miles Under The Stars" (the only guest musician in this collection).

To minimize confusion for the uninitiated, I'd like to point out that "100 Million Miles Under The Stars" and "100 Million Miles Under The Stars - The Supplementary Volume" are two connected, but different releases:
While the former is the "actual" album - 1 CD! - released by SynGate, the latter is a self released 5-CDr-Box with music recorded for, but not used on the album, plus a couple of alternative (and mostly very different) mixes of album tracks.

These albums (and much more!), as far as they are self-released, and can be found here, both as download or high-quality CD-r:
michaelbrueckner.bandcamp.com/music

The two (and again some more) albums released on SynGate (or one of it's sublables "Luna" and "Waves") can be found here:
michaelbrueckner-syngate.bandcamp.com

"Hour three" contains all previously unreleased music - actually improvisations - from 2019, with one exception: Part 10 is a remastered excerpt of an improvisation published via YouTube in 2019.
So - this hour indeed is a new album, available only in the context of this release on Aural Films.

Over the years, more consciously though since about late 2016, the way I conceive, produce, record and perform music changed considerably. I felt less and less comfortable with my decade-long persona as a nerdy computer musician, programming and editing his musical ideas in endless night sessions, immersing himself very deeply into every detail of the music.
Although I can still switch into this mode today if needed, today I prefer to create music in a live situation, mostly improvising and performing intuitively, and with a reduced palette of instruments. Which created the slightly paradox situation that after more then 20 years, my music started to sound rougher, less polished and less musically organised than even back when I started out at all - in the process sounding "older" than my old music. But I like to believe that on a good day, it also gained nice things in exchange:
More spontaneity, more liveliness, more expression, more "feeling" - maybe more soul. Plus more joyful chaos!