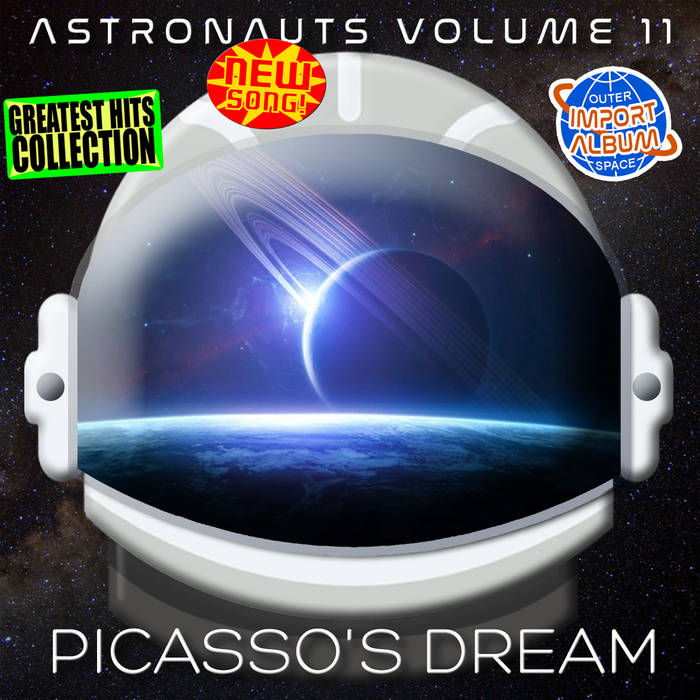 Volume 11 features a fine collection of music from American Electronic Progressive artist, Picasso's Dream. Read more about what he has to say about Space and Music in the Questions and Answers below:

A: My father was always interested in NASA, and the events of both the Challenger and Columbia explosion were major influences on my life, especially the Challenger which happened when I was in 4th grade. Always have been a big space fan since the days of the first Star Wars and Star Trek movies.

Q: What interests your most about Space exploration?

A: Love the fact that we’re now seeing planet surfaces like Mars and Pluto.

A: All the songs have to be epic! Why else would you want to write music if the song isn’t going to be an epic piece of music that covers the cosmos?

A: Our first album is a story of an Alien that comes to Earth and view humanity for thousands of years. After watching humans, he leaves a gift to mankind before heading back to his home planet.

A: You could not create electronic music unless you picture yourself floating in space. Whether actual space or the space inside your head electronic music has shaped the adventure for decades.


Progressive Rock… the final frontier of musicianship. Setting new course for destinations yet unknown Picasso’s Dream sets themselves apart from the ordinary. Determined to write the most hypnotic progressive and modern rock combined with amazing visuals, Picasso’s Dream has become one of Central Ohio's top Progressive Rock performances.

Visionary Anthony S. Anselmo founded the group in 2013 with the desire to create something out of the ordinary from the usual acts found within the local region. Soon after Picasso’s Dream became the opener of many central ohio rock shows, as the group would become the appetizer of acts ranging from metal to pop.
​
In 2017 Picasso’s Dream 2.0 would be launched with newcomers Vincent Simon on Drums, Max Bigelow on Bass and Tony Kertis on Sax. Later Chris Bianchi would join on Guitar forming what would be the modern version of the group.

Combining the best talents of modern technology and professional expertise; Picasso’s Dream presents an all-inclusive experience. Whether illustrating the story of the massive cosmetic explosion of ‘Worlds Collide’, the journey of an alien from another planet in ‘Blast Off’, or the mind of Norman Bates with ‘Bates Motel’ Picasso’s Dream provides distinct imagination behind their incredible sound.

So step aboard the starship and come join us on the journey across the Universe, we promise to have you home in time for dinner!